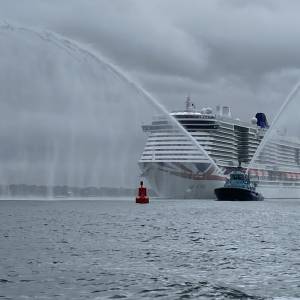 On Sunday the 16th of May P&O's new eco friendly cruise ship arrived in Southampton. The largest cruise ship built for UK holiday makers arrived in Southampton for her naming ceremony. Iona has 17 passenger decks, is 345 metres long, weighs 185,000 T and is believed to be Britain's most environmentally-friendly cruise ship.
The vessel is the nation's first liner to be fuelled by liquefied natural gas, which P&O described as "one of the cleanest fuels in the world".

Despite the horrible weather Boatshed Hamble went out to see her in and to take photos. 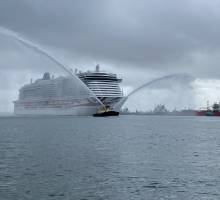