Boatshed Hamble
Half term holiday and the "Kids"
Monday, 06 June 2011

Half term holiday and the "Kids" 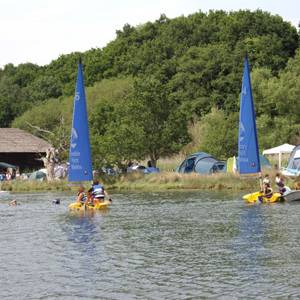 So what do you do with the kids at half term? Well here is just one of the things that about twenty family’s did last weekend with their children. We are all members of Hamble River Sailing Club and the Club organises an annual camping trip by boat to the upper reaches of the River Hamble over a three day period.

Most kids love playing on and in the water, and one way that Hamble River Sailing Club promotes confidence in the younger members is to get them playing in dinghies. So last Friday on a good high spring tide a flotilla of dinghies, rescue boats etc left the club house and headed up river to a plot of land belonging to the YMCA at Fairthorne Manor, dinghies were rigged, rescue ribs manned and any member with a suitable boat encouraged to bring it along. Wetsuits and buoyancy aids were the order of the day and the younger members told to bring water pistols! Tents and camping equipment had already been delivered by car.

The Delbridge family loaded up the Boatshed Hamble Boston Whaler and headed up river to the camp site, where we acted as escort boat to the dinghies as we all made our way to start with up the busy reaches of the Hamble, but when you get beyond the M27 road bridge the river opens out and its all over hanging trees down to the waters edge. Just look at my photos to see how much fun the kids had not just in the dinghies but in the water as well as the mud and in the woods. At the end of the weekend I had three tired happy kids and from what I saw I think every child and adult who was there had a great time.

My kids now want to go camping more often, but only by boat ! 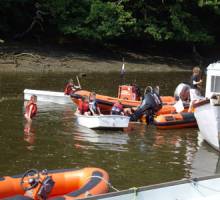 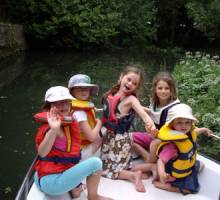 The upper, upper reaches of the River Hamble 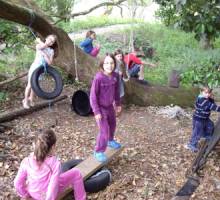 Fun in the woods 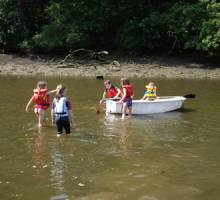 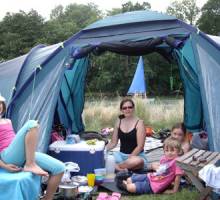 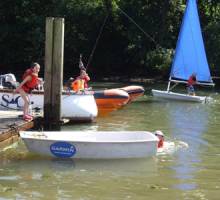 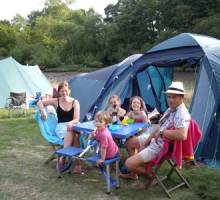 Supper by the river 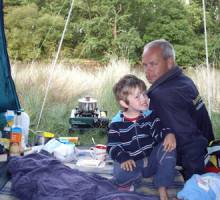 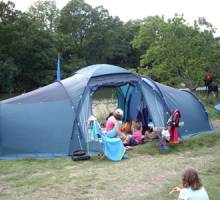