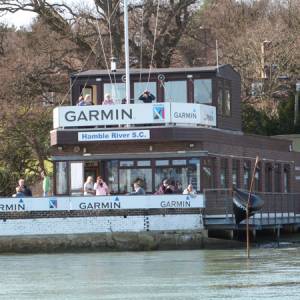 Over the weekend of 10-11 March Hamble River Sailing Club hosted the 50th Anniversary Hamble Warming Pan regatta. This year’s invited classes were the Firefly and National 12 fleets, the local Foxer dinghy fleet, the Merlin fleet who’ve attended the event since it started in 1962, together with a new addition for 2012, the Enterprise class. A total of 60 boats competed over the weekend.

Boatshedhamble.com was one of the proud sponsors of this great weekend and Peter Delbridge was there taking photos, along with HRSC acting commodore Dermod o'Malley who has just become an agent for Boatshed Hamble.

The original event programme scheduled two races on each day separated by a lunch break. Unfortunately the weather decided not to cooperate with the best laid plans of the organising team. Whilst onshore spectators enjoyed ice creams in the unseasonal sunshine extremely light winds meant competitors struggled to make headway against some of the strongest tides of the year. With such difficult conditions the HRSC race team did a great job to run two back to back races on day one for most of the fleets. With just a single race possible on Sunday the end result was a no discard series for all classes.

The largest fleet was the Merlin Rocket class with 24 entries. Overall winners Jon Abbotson & Michael John Gifford just pipped Rich Admas & Chris Gould by virtue of their win in race 1, both boats ending with a score of 13 points. Richard Whitworth & Chris Winters were third overall. Use of the Z flag and some overenthusiastic starting practices led to much confusion with the final scorecard!

Barney Smith & Alannah Witherby won the 15 strong Firefly class for the second consecutive year with a 1, 2, 3 scoreline, after surviving a couple of brushes with the sailing instructions. Roger Morris & Jo Bailey were second overall and Andy Blundell & Maddie Fenner sailed a very consistent series in their newly repainted gold boat to end up third.

The 12 boats in the Foxer fleet sailed in the best breeze of the weekend with their courses confined to the River Hamble close to the sailing club. Shaun Barber won four of the six races and finished well in front of Team Armstrong (Lucy on Saturday and Jay on Sunday), with Chris Hamel in third.

The Enterprise and National 12 classes had smaller fleets. Will & Mary Henderson had the only clean sheet of the weekend with a scoreline of three wins in the 12 class. Ann Jackson & Alan Skeens were the Enterprise class winners.

Over the weekend the club marked the 50th Anniversary of the event with a number of special events. A 60’s disco was held on the Saturday night which was greatly enjoyed by several of the older competitors(!), and a 50th Birthday Cake was specially manufactured just in time for the prize giving on Sunday afternoon. HRSC is looking forward to running the 100th Anniversary Warming Pan in March 2062. See you there!

Thanks to Phillipa Pountain and Chris Gillard for some photos. 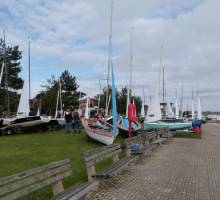 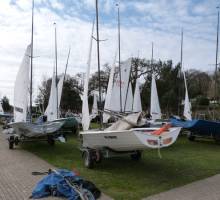 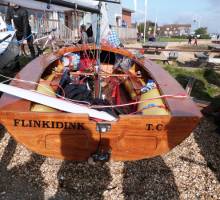 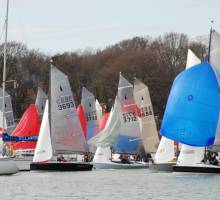 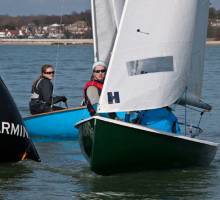 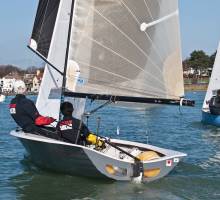 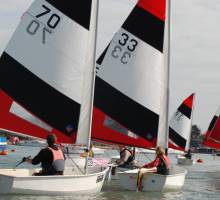 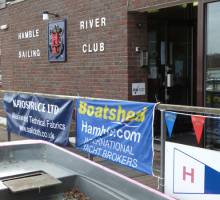 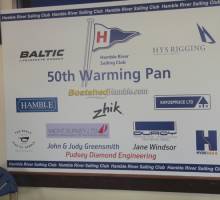